I’ve been crazy busy and so this is crazy late, but thankfully books don’t have expiration dates so it’s okay. First off, I want to note here that no matter what I might say about these books in the context of this list, they were all good. I don’t write about bad books on this blog anymore (assuming I even finish them) because it makes me feel bad. This blog is for sharing the good ones. Sometimes there are good books that just weren’t meant for me, and that’s okay too.

Here are some books I read in 2019 and what I thought of them:

Here and Now and Then by Mike Chen 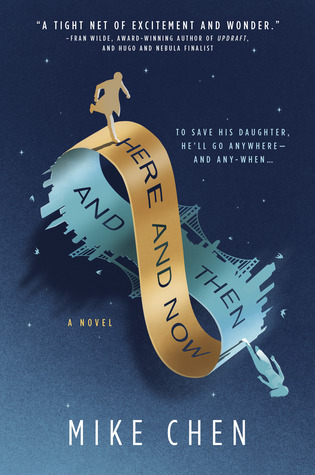 I read this book over a year ago now and I still think about it sometimes. Here and Now and Then is an adult science-fiction story with some suspense mixed in and a main story about the lengths gone for family. I don’t typically go for sci-fi or suspense. Mike Chen showed me what I was missing. Here and Now and Then was a character-driven plot with satisfying science to fill out the world. I can’t wait to see this made into a movie starring Idris Elba (not actually happening as far as I know, this is just me daydreaming). I recommend this if you want to dip your toes into something sci-fi that isn’t all aliens and spaceships.

The Shadow and Bone Trilogy by Leigh Bardugo

I read Six of Crows by Leigh Bardugo in 2018 and loved it. Shadow & Bone takes place in the same fantasy world a few years before SoC, so I figured I’d go back and start from the beginning before I moved on to Crooked Kingdom. The Netflix show was also announced around this time, along with the news that the main character Alina would be half-Shu (read: half-asian) and as a “half-asian” myself, I was sold. I happily read through all three books imagining half-Shu Alina and loved every second. The first book was published in 2012 and it does read like a fantasy YA book series from that era. It’s got a chosen-one, quest-based kind of storyline which is a little more classic and formulaic than the SoC duology that follows it. If you like that kind of thing, this is for you.

As soon as I was done the Shadow & Bone trilogy, I read Crooked Kingdom, the sequel to Six of Crows. This duology really demonstrated Leigh Bardugo’s growth as a writer and author between the two books. I was impressed with SoC and was worried about how the hell Bardugo could follow it up without disappointing. Well, she sure showed me. Crooked Kingdom was masterful, logical, and magical. It was epic. It built cities on the solid ground SoC offered and developed further the characters SoC made us love. It was awesome, and if classic fantasies like the Shadow & Bone trilogy aren’t your thing, you can go ahead and just read this duology on its own. Highly recommend.

A Darker Shade of Magic by V. E. Schwab

I’d been hearing about V. E. Schwab from all directions for a while before finally picking this book up. I hadn’t read anything of hers, YA novels included, but I only heard good things and the premise sounded promising, so I went into this optimistic. Holy crap, I started reading and couldn’t stop. A Darker Shade of Magic is the first book of the Shades of Magic Trilogy and was incredible. The characters, the world-building, the magic system were all great. The plot was fast-paced and unpredictable, and I was wholly invested in everything that happened. I am now a big V. E. Schwab fan, and bought the rest of the Shades of Magic books, plus the Vicious duology. I’m reading the A Gathering of Shadows now, and so far am loving it as much as the first. Highly Recommend.

On Writing: A Memoir of the Craft by Stephen King

This book has been recommended to me on multiple occasions over the past ten years. Heralded by many as a “must-read” for writers, I suppose it was inevitable that I would eventually pick it up, even with my aversion for non-fiction. I also don’t love horror stories, and as a result, this is the first Stephen King book I’ve ever read. Hilarious, I know.

As the title says, it’s a memoir. I don’t think it should be touted as advice, although King does outline his personal writing rules and habits and states in places that some of these are “musts” for writers. Some tidbits I thought were good and could be useful, but others wouldn’t work for everyone, so I didn’t love the black and white way he laid it all out. What I did like were the stories of how he became a writer, stories of how he came to write one book or another, and the little things that led to iconic scenes from books now known by everyone. I like reading about the connections between a writer’s life and their work, and if you like that, too, I’d say give this a go. Plus, King’s a legend.

I don’t remember what exactly led to me reading this book, but hey, a book about a teenage gumiho (legendary man-eating creature who changes between beautiful woman and fox form) falling in love with a teenage boy in contemporary Seoul wasn’t something I’d ever read before, so I tried it out. As it was, I enjoyed it well enough. The style of writing bothered me a bit. Some of the choices were off, by which I don’t mean wording or smaller details, but slightly bigger things like when Cho decided to use imagery or how she went about revealing a plot point. The characters’ personalities sometimes seemed strained, especially Jung. It was as if reading someone’s attempt at the character rather than reading the actual character. Still, I think this would’ve been an absolute favourite book of mine had I read it in high school. Would recommend if you like takes on folktales and fall into the younger half of the YA age group.

Spin the Dawn by Elizabeth Lim

Read-a-library-book-copy-and-then-went-and-bought-my-own-hardcover-copy loved it. Finished-it-and-immediately-went-back-to-reread-my-favourite-parts loved it. Pulled-several-late-nights-to-read-it-and-then-pre-ordered-the-next-book-in-the-series-at-five-in-the-morning loved it. It might have been one of those “perfect book at the perfect time” situations for me, when a book hits just right. But also, it was excellent.

First off, I want to say that this book is marketed as Mulan meets Project Runway and I hate that. But if you like that then you should read this book. However, if you also hate that, you should also go ahead and read this book. Sure, it is “Mulan meets Project Runway” for a few chapters in the beginning, but I feel like that descriptor is such a disservice to the depth and breadth of the story and the world within which it was created. There was an element of folktale to it, and quest-based fantasy, but all done in a new and fresh way. The world was vivid, the characters colourful, the story complex, and the relationships between characters were some of the greatest and most realistic I’ve ever read. There’s loss and change and struggle and sacrifice and hope and love. This book made me feel, and I loved every page. Highly recommend.