I hit a snag when working on my big bad book last week. I’ve done well to improve my word count about 20k in November, but a week ago I had some trouble with chapter eleven. I wrote it, then I rewrote it, then rewrote it again. In one day, my word count dropped over two thousand words, and that’s with the thousands of words I did add.

The thing about chapter eleven was Character X. I’ve mentioned him before in this post, if you’re interested.

My history with Character X is a complicated one. When I was working on the very first drafts of SC (which was four books back then), he appeared briefly in Book 1 and then disappeared and I forgot all about him. I started writing him in Book 2, and only realized a while later that he’d also been in Book 1. He hadn’t been a planned character, but he became so entangled within the story and I liked him enough that he became a key player.

But, when I finished and/or put aside all the first drafts of SC, I started rewriting Book 1, and as I said before, he didn’t really have a part in Book 1. I also cut the scene he’d accidentally initially shown up in. And then I reached a point in the rewrite where I realized one thing or another, like I changed too much or something, where I would scrap it all and start again. And again. And again. Anyway, I spent a few years of writing multiple versions of the big bad book where I never reached Character X’s introduction before scrapping it.

Despite never reaching X’s part in SC, I was still writing him. Sometimes I’d just write down little scenes with him that popped into my head and I’d send them off to a friend or my sister for early reading pleasure. These scenes took place after the events of the last book I’d had planned, and I wrote about him in the days, years, and decades after, going to university, starting his career, and having a family (he’s not the only character I’ve done this with, but his was easily the most written about). I also started writing another novel—a spinoff of sorts—which took place ten years after SC does. Much of it was from X’s point of view. As the trajectory of the story in SC changes, this story of what happens ten years later becomes more inaccurate, but what has never changed was how I knew everything about character X.

So when I reached chapter eleven, in which we meet character X for the first time, I was excited. I hadn’t written X’s intro since that first of first drafts, years and years ago, and I knew him well and was excited to introduce him to my characters and readers. Except…I got stuck.

I wrote chapter eleven, scrapped it, rewrote it, and scrapped it again. I couldn’t figure out why this character who I knew so well was now becoming impossible to write. I tried having him interact with my MC more, talk more, do more, be more. Finally I let it rest, still unsatisfied, and I went to read all those little bits and bobs I’d written about him over the years, trying to figure out what it was about him that evaded me now. And I think I figured it out.

A big part of why I liked Character X so much was because I got to watch him grow. He has an arc (that I won’t get too detailed about here) and in my first draft, he’d only gradually grown more important over the course of three novels. The SC rewrite I’m now on is unlikely to be a series of four books. I have either deleted or condensed a lot of scenes and characters, and in Chapter Eleven, I realized I was trying to do the same to character X. That is, I was trying to put the decades of development I knew he had into one chapter in an attempt to make everyone love him as I did, but in doing so I undercut what made him fundamentally who he is. 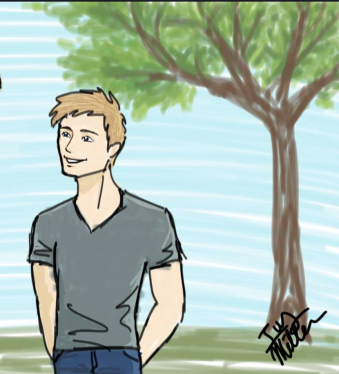 So I rewrote chapter eleven once again. This time, I tried approaching character X in the complete opposite way from before, writing as little about him as possible. And it clicked. He was him again, and he bled into the story naturally, instead of being forced in which he’d fought me on, I guess. If you find yourself in a similar position of having more in your head than can fit on a page, I’d say keep it in your head. Details will find their way into your work if they’re meant to, and the rest will wait their turn.

All this to say, I did not win NaNoWriMo this year. Although my word count was technically over 50k at the end of the month, my goal had been 80k because I started from 36k and even then it was less than the average NaNoWriMo participant. But I wouldn’t call it a total loss. I wrote more of SC this month than I think I ever have in any month ever before in my life—and I had a busy month! I proved to myself what’s possible. I also proved my own excuses to be bullshit. So do I think I’ll be done this rewrite by this time next year? Well…